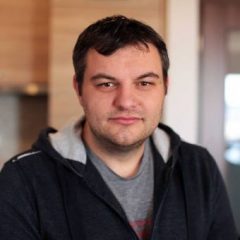 What’s your job in YWAM Kosova? Since 2011 I served in IT and communication here in YWAM Kosova. I am working as a programmer and social media professional. Now, I am becoming more engaged with the leadership of YWAM Kosova.

How did you get involved in YWAM? Nesha, my sister, did a DTS in 2008 in YWAM Kona, Hawaii. She introduced me to YWAM and inspired me to do a DTS as well. I did my DTS in January 2011.

What inspires you? Seven Spheres. I truly believe this is a vision from God we all have to embrace and invest in to see a transformed country. And since YWAM received this vision, YWAM is responsible to push it forward by the body of Christ.

What are the challenges for YWAM in Kosovo? We need a Team! People who are passionately looking for God’s kingdom in Kosovo as we are. Our next step is building a team here in YWAM Kosova. You are invited to join us!

What’s your favorite quote or bible verse? There are some:
“For I know the plans I have for you”, declares the Lord, “plans to prosper you and not to harm you, plans to give you a hope and a future.” – Jeremiah 29:11-
“I consider that our present sufferings are not worth comparing with the glory that will be revealed in us.” –Romans 8:18-
“Because of the Lord’s great love we are not consumed, for his compassions never fail. They are new every morning; great is your faithfulness.” –Lamentations 3:22-23 –

What was your dream when you were a child? Becoming great at computers. Because wherever God will send me, I will be equipped to serve in that field. Computers are the same everywhere. 😊

How does a really good day for you look like? Enjoying a morning coffee, while planning my day. Then meeting people who share the same idea of moving one more step closer to what God has called us to do.