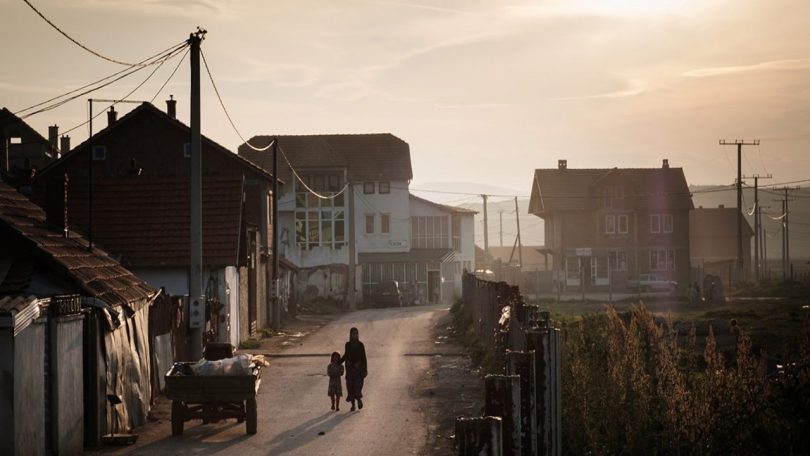 A disease started in the hearts of people. Jumped over to societies. Went across whole nations. And infected the whole world: Discrimination. A group of people treated differently. Rejected and excluded.

Kosovo. This young country is still struggling with the consequences of war. Due to corruption, political instability and lacking industry, large sections of the population are affected by poverty and unemployment. Ethnic minorities are hardest hit.
88% of the population in Kosovo are Albanians. The other 12%, the so called ethnical minorities, are made up of Serbs with 7% and Roma with 5%. The minority of Roma are again distinguished into three different groups: Roma, Askhali and Balkan-Egyptians. However, their circumstances do not deviate from each other.

If the situation in Kosovo is hard for Albanians, for Roma it’s double worse. Many Roma minorities face widespread discrimination in Kosovo. Since hundreds of years these people are excluded from society, discriminated in all areas of social life. Even today they live on the brink of society, often facing great dimensions of poverty.
But how does the discrimination of Roma in Kosovo practically look like?

They are confronted with different levels of disadvantages every day. Even children are infected by this disease called discrimination. Often Roma children are the only ethnic minority in their class. Therefore, in some cases, they are being excluded from the class community and teased or even bullied for their ethnic origin.
Also in working life, minorities are confronted with considerable difficulties. As there are already very little employment opportunities in Kosovo, Roma people have very rare chances to find a job. When Albanians see Roma asking for a job in their company, store, business or factory, a Million, hundreds of years old prejudices about this group of people stick into the minds of the Albanians. So they won’t employ them. Just because they are Roma.  Sorted out. Wrong ethnical background.
This is one of the reasons why the unemployment rate among Roma in Kosovo is up to 90%, captivating many families in absolute poverty without any chances to improve their hopeless situation out of their own strength. Waste collecting is often their only opportunity to earn a few euros for the livelihood of their families.
Moreover, access to good education is a huge problem for Roma. Among Roma communities education is still on a low level which explains why they cannot be competitive enough on the labor market to find a job. Only 73% of girls and 88% of boys from Roma, Askhali and Egyptian communities complete primary education.
Furthermore, access to water and electricity is in some Roma communities problematic because often water and power lines end directly in front of the Roma settlements.

But the problem is not only the prejudices in the heads of the Albanians with which the Roma are afflicted. Likewise, this disease called discrimination has its aftermath on the minds of the Roma people. Being told all their lives that they are worth less, and then also being handled like this, they don’t have much confidence in themselves or hope for their lives. They think they are worth nothing because that’s how society treats them. So they lose hope. And perspective. And don’t even try to make something out of their lives.

Change must happen in both, the minds of Roma themselves and in the minds of the Albanian population. Both sides need to understand that there’s only one category of human beings: Normal people.
Isn’t it crazy how fast we humans think that we are better than others? However, Bible says:

But if one God created us all, He created us all with the same dignity, the same worth and same value. So how could we ever differentiate between countries, original backgrounds or ethnic affiliation?

Not only this country but in fact the whole world needs to create a society wherein all people are created equally. Let’s fight for a generation through which prejudices disappear, little by little discrimination will be abolished and a respectful contact between Albanians and Roma can be established.

There are some organizations and churches in Kosovo raising their voice for the bitter injustice Roma are facing. Through after-school programs, house building projects and job trainings they want to create hope for a better life, a better future and a better perspective in Kosovar society.  And by that, give Roma people the possibility to develop a life with DIGNITY.
Also our outreach teams coming from different YWAM bases work together with these churches and organizations to bring God’s hope and love into the desperate and most wounded hearts of these people. In the eyes of this world they might still mean nothing, but in God’s eyes already now they mean everything.

If you want to find out more about Roma and read some stories, click here.